“The show must go on.” That is what people say when an actor – however important he or she may be – leaves the stage. Similarly, the History of Ideas Research Centre and Orbis Idearum must go on. Nevertheless, we cannot hide our deep sadness at the untimely death of the founder of the Centre and its journal. Michel Henri Kowalewicz passed away on October 8th, 2016. We ask the reader to please forgive the unusually colloquial tone in which we are writing this Preamble; a style that is far from academic jargon and the cold precision which is typical of scientific publications. It seems to us that the moment calls for such a change of register. In the period between his diagnosis with cancer and his untimely death, we fortunately had many occasions to meet and talk with Michel. Despite the rapid progression of his illness, Michel remained strong to the very end. Whenever he had the strength to do so, not only did he continue his own work, but he also helped others with theirs. There was unfortunately not enough time to settle all of the questions related to the Centre and Orbis Idearum, but Michel made clear his desire that both be continued by his close collaborators and friends. In our attempt to fulfill his wish, we present you, the reader, with a new issue of Orbis Idearum – an issue that we sincerely dedicate “to the memory of Michel Henri Kowalewicz”. 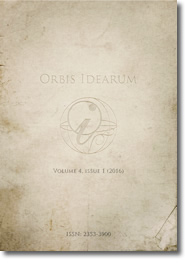 Gregorio PiaiaRereading Utopia. In search of the intentio auctoris (it)

Riccardo CampaThe Legacy of Nietzsche in Max Weber's Sociology (it)

Jens LoenhoffOn Concepts of the Boundary in Classical Sociology (en)

Marek DrwięgaFreedom Between History and Metaphysics. On the Philosophical Images of Man by Jan Patočka and Józef Tischner (de)