Faced with increasing social, economic, and financial tensions, the International Day for Tolerance established by the United Nations is becoming––as never before––a challenge for the entire globalised world. The challenge is more significant as further values within the culture of the Western world are also at stake. These values, which remain at odds, are put to the test in an economic and political race against other cultural models, which do not share such values and that find the very notion of tolerance alien. We are deeply convinced that it is worth critically examining the history of the ideas, words and concepts surrounding the notion of tolerance, especially in our current time of rising intolerance not only in the Middle East, but also in other parts of the globe. At the same time there remains the age-old question of the limits of tolerance, what used to be called a denial of tolerance, or briefly “intolerance”. How far we have succeeded, you can judge for yourself. 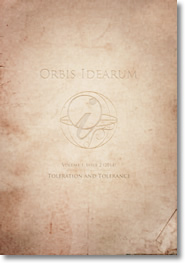 Konrad SzocikThe Idea of Toleration in the Doctrine of the Catholic Church: A Brief Sketch (it)

Helmut PulteTolerance in Science from a Philosophical Perspective. An Essay on its Forms and its Necessity in Modern Times (en)